I have both daughters thanks to assisted reproduction

A likeable TATIANA HEJBALOVÁ (41) is a mother of beautiful daughters SAŠKA (18) and ADELKA (4).

She would have had neither of them if she hadn’t undergone artificial insemination. And she has never regretted her decision. Her life has been filled with happiness because of this.

“I have both daughters thanks to assisted reproduction. I underwent a laparoscopic examination and then I was told that it would not be possible for me to get pregnant naturally,” Tatiana started to talk about her long pursuit of happiness. “With my first daughter Saška everything was somehow much easier, although… I underwent intrauterine fertilization several times and Saška was born at the third try. Although we were happy, my feelings were puzzled. I was pretty young, only 23 and I didn’t know what to expect,” smiled a young lady who finally managed everything easily.

My first pregnancy was easier.
Although the pregnancy with the first-born Saška was uneventful, her younger sister Adelka was a “harder case”. “Together with my husband we underwent sperm collection and pick-up of follicles, I used a lot of hormonal medication and injections, and only afterwards the embryo was inserted into my uterus. But the first try failed,” she said in deep sadness. The next insemination was already successful. “We are thankful for it to cryoembryotransfer (a rapid method of embryo freezing, editor’s note). It was emotional and I was very happy. Both pregnancies, fortunately, were uneventful, however, during the second one I had to undergo also a collection of amniotic fluid – amniocentesis – as I was not the youngest one and I had abnormal blood count as well,” Tatiana explained. “Waiting for results was horrible,” she added that miraculously everything worked out fine.

Saška is both a sister and also another mommy.
The age difference between the sisters from a tube is fourteen years. “The girls get on well together, although they have different fathers. Saška is a great support to me and since Adelka’s birth she has been helping much. Sometimes it seems as if she is her second mommy,” the mother of two nice girls enjoys. Adelka’s birth has brought joy, constant noise to the Hejbal family and the desired feeling of happy family.
“My daughter is very active, but she is our sweetheart, a bit of a handful. We are very grateful to the whole team of the Centre of assisted reproduction in Bratislava to allow us to experience a wonderful feeling of parenthood,” stressed Ms Hejbalová who appreciates a lot the willingness of the staff to help: “They got me through it every bit, whether during pregnancy or in tough times before and after delivery.”
The third time’s the charm

And what reactions did the double mommy encounter concerning the fact she has both kids due to artificial insemination? “People nearby have no objections to assisted reproduction, but some would not go into it because they could not handle it mentally,” Tatiana suggested. Together with her partner they also long for the third child and believe their dream will come true. In fact, they have frozen embryos and now they are waiting only for a right moment. “We don’t care what it is. As long as it’s healthy,” she smiled hopefully. And how Tatiana encourages women who want to fulfil their dream of motherhood? “It’s hard to advise someone; it is a deeply personal thing of each couple. But I feel that I’ve done well and I have beautiful and healthy daughters. If I had to decide again and there was no other choice, I would do it again. It is hard, but the feeling when a new baby is born is unforgettable. It is wonderful,” sighs Mrs Hejbalová who wants to feel it for the third time. 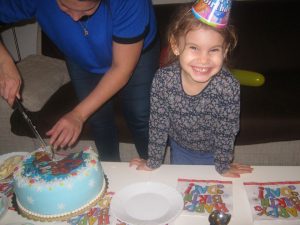 Manage your cookie acceptance
We use technologies such as cookies to store and / or access device information to provide the best experience. Consent to these technologies will allow us to process data such as browsing behavior or unique IDs on this site. Disagreement or withdrawal of consent may adversely affect certain features and functions.
Manage options Manage third parties Manage vendors Read more about these purposes
View preferences
{title} {title} {title}