If you want to, you can do anything

As my mum keeps saying: when gynaecological diseases were being passed out, perhaps I might have been queueing twice. My problems began in my youth when doctors detected a so-called ‘chocolate’; cyst on my right ovary. I was 20 when I underwent the operation also on the part of the ovary, and during surgery, they even found out endometriosis. And that was just the beginning. A few years later I had to fight another battle because a finding on the cervix and cytology III augured ill. After multiple cauterizations with liquid nitrogen, the wound on the cervix diminished, and the cytology was normal again. I was in peace for a longer time, but then the whirl of diagnoses and visits to doctors started to spin again. Another finding revealed four uterine fibroids, the largest of which was up to 6 cm. For some time, I ran away with the idea it was not necessary to solve it, but I was wrong. After all, those fibroids should have been blamed that our efforts with my husband to become pregnant for several years were all in vain. The whole situation deepened in the autumn of 2016 when I was admitted to hospital twice with massive menstrual bleeding, which was caused by the largest fibroid. Doctors eventually decided that curettage was necessary and I would also need another operation. In agreement with the doctor, I underwent laparoscopic surgery in May 2017 hoping to get rid of fibroids for good. But not everything went according to plan, because there were a few &quot;surprises” in the womb. The intervention had been scheduled for half an hour, but it took five hours as the doctor had to fight his way through all the adhesions. As he later reviewed, my left fallopian tube was like eroded by glue, and so it had to be unexpectedly removed. There was no more time left for all fibroids, but at least the largest one was removed. So, the overall summary? At that time, I was 38 years old; part of my right ovary was missing, I lost my left fallopian tube, underwent one curettage, had three  fibroids in the uterus, endometriosis was diagnosed and the cervix scarred by previous procedures. Moreover, doctors could not detect whether my right fallopian tube was fully patent, so the possibility of becoming pregnant was fainting more and more.

And then came the moment at the right time from the right person. The doctor who had operated on me mentioned that he knew a doctor from the GYN-FIV Centre we could go to. To conceive naturally would be a miracle, and so due to a lack of time he directly called the doctor and made an appointment for us. I knew the Centre as I used to go there for my regular check-ups with my gynaecologist. I was pressed for time because in October I was about to turn 39, which is the age limit for IVF covered by insurance. All of a sudden, thanks God everything locked together and was running smoothly. Within the tests, we found out that my husband had had only a small percentage of motile sperm. So, it was a good thing that we didn ‘t rely only on nature, as we would probably never wait to see. Despite my diagnoses, 5 eggs were retrieved of which two were able to be fertilized.

Although one failed to embed in the womb, yet another resulted in Tobiasko. And the first time we tried!!! Up to now, we can’t believe it; it is a miracle of GYN-FIV and a baby we literally prayed for!

We are both very happy parents! My pregnancy, fortunately, was uneventful, I was not even a patient at risk (due to fibroids), and I did not experience any morning sickness. They ‘only’; scared us with trisomy and potential Down’s syndrome, but none of it was finally confirmed. Tobiaško was born on June 21, 2018, healthy in the 39th week of gestation, with a birth weight of 3720 g and a length of 53 cm. Although there was a danger of losing my womb during the caesarean section, it did not happen.

Indeed, some minor complications with bleeding occurred, and transfusion was considered, yet I finally did not need any.
I want my story to be motivating for other women who may have similar gynaecological problems.
Our story is a clear proof that where there&#39;s a will, there&#39;s a way. The great job of GYN-FIV experts has been confirmed. Obviously, they are doing their job very well. When you believe that what is to be, it will be … so that even happens. We keep our fingers crossed! 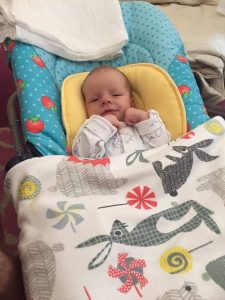 Manage your cookie acceptance
We use technologies such as cookies to store and / or access device information to provide the best experience. Consent to these technologies will allow us to process data such as browsing behavior or unique IDs on this site. Disagreement or withdrawal of consent may adversely affect certain features and functions.
Manage options Manage services Manage vendors Read more about these purposes
View preferences
{title} {title} {title}